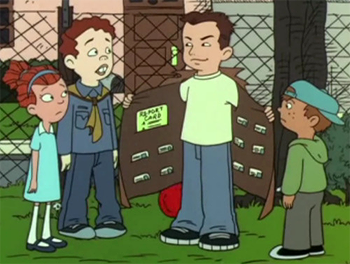 "Need an ID? Or a better report card?"
"A: You can never go too far. B: If I'm gonna get busted, it is not gonna be by a guy like that."
— Ferris Bueller, Ferris Bueller's Day Off
Advertisement:

The high school hustler effortlessly outfoxes authority figures — particularly those who are irrational and hidebound. They're just packed full of brainpower, connections, chutzpah, and luck.

They can arrange a Chain of Deals and make it work for everybody. They can pull off a Bavarian Fire Drill without getting his bluff called. Often they're out for themselves, but they're frequently willing to help those in need.

The High School Hustler may use some friendly Dumb Muscle to deal with problems their brains can't beat. Other times they're the Karmic Trickster, using their brains to dish out poetic vengeance to bullies and protecting the weak. But they're also the kid running the betting pool and selling term papers.

They are not a straightforward young hero. They lust for payment in return for their good deeds. Popularity might be their deepest motivation. They won't demand payment from those who can't pay though, or run out on their friends. They just like to take the easy and stylish road to success. In general they are a good kid.

The High School Hustler is the positive adolescent version of the Mouthy Kid. Usually they're regarded as a good kid by almost all adults save those whose authority they directly challenge — and they can maintain that camouflage even under fire.

They are the ideological nemesis of Dean Bitterman. If they grow up and joins a Five-Man Band they'll either be The Leader (a type 1: mastermind) or if the The Leader is The Hero they'll be The Lancer to foil their purity. Other possibilities are The Face or The Smart Guy who comes up with the sneaky plans. When they graduate high school, they may become a Frat Bro upon entering college, but any fraternity they join will usually see them preside over a bunch of dorky outcasts as their charismatically rebellious trouble-making leader rather than the bullying Jerk Jocks who make up the other fraternities.