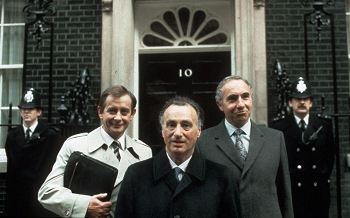 Not always Machiavellian.
"Government, even in its best state, is but a necessary evil; in its worst state, an intolerable one."
— Thomas Paine
Advertisement:

The Government. Can be Orwellian, also seen as the forces that hide aliens/shot JFK. Major unseen character in Government Conspiracy shows.

Recently, some shows and movies have slightly subverted this with a government that is villainous not due to malevolence or conspiracy, but due to ineptitude, necessity, or sheer size. This is the government that isn't actually out to get you, but isn't interested enough in your plight to notice that there's any abuse going on. Can be condensed into a single character, a rules-stickler or jobsworth who doesn't much care that your life's on the line: you still have to fill out form 47-B. (Such characters have some overlap with the less sympathetic instances of Inspector Javert.)

Related to the Government Procedural setting, but while these focus on the inner workings of the government and the people inhabiting it, they rarely cast the government officials as a malevolent force.