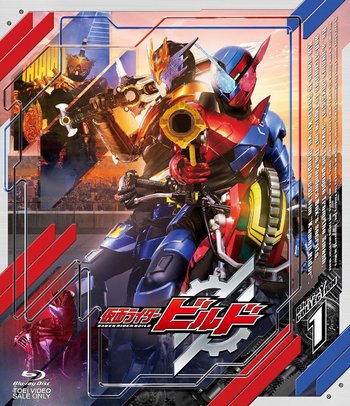 "Now, shall we begin the experiment?"note From right to left: Kamen Rider Build/Sento Kiryu and Kamen Rider Cross-Z/Ryuga Banjo On the top and bottom: Night Rogue and Blood Stalk
"Ten years have passed since the Pandora Box was discovered on Mars and caused the infamous Skywall Incident. Our country was divided into three districts known as Touto, Seito, and Hokuto, resulting in utter chaos."note From episodes 29 to 35, the narration changed to "In order to open the Pandora Box and release its massive amount of energy capable of destroying the world, a new battle has begun!". Then from episode 36 onward, "The Pandora Box, which contains enough energy to destroy the Earth, has finally been opened! Standing up to Evolt, the extraterrestrial life form that has gained its power, are the Kamen Riders!"
Advertisement:

Ten years ago, Japan launched Project Prominence; the first successful expedition to Mars. If that wasn't enough, the astronauts managed to bring back with them proof of extraterrestrial life on the red planet - a mysterious cube with strange properties, found in ancient ruins. This artifact holds the potential of discovering a source of unlimited clean energy. With this incredible asset in their hand, all signs pointed at the advent of a Golden Age for Japan... but then everything went wrong.

During the celebration of the expedition, where the cube was for the first time shown to the world, a mysterious man barged in and, after a struggle with security, reached out and touched the object. This resulted in its activation and caused the sudden appearance of the Skywalls - giant, crimson-glowing walls that violently tore through Japan, and even reached miles into the sea. Not only that, everyone present at the event were warped by the energies of the cube, increasing their inherent aggression. This resulted in the nation being divided into three opposing states - Touto, Seito, and Hokutonote East Capital, West Capital, and North Capital, each one with a separate government and doctrines, but all desiring the massive power of the artifact - which after the Skywall disaster became known as the "Pandora Box" - for themselves.

In the present day, Touto holds custody over the Pandora Box, but a new crisis shakes the region - the appearance of humans-turned-monsters known only as "Smash". While the government evades the topic, there is a hero hunting down the beasts. Unbeknownst to all, his identity is a young, amnesiac scientist named Sento Kiryu, who was taken in by café owner Soichi Isurugi when he was found in a rainy alley with no memories of anything except his escape from experimentation on by an evil organization called Faust. Now, as he searches for clues about his past, he uses the Build Driver to transform into Kamen Rider Build and personally combat Faust and the Smash, his powers augmented by "Fullbottles", bottles containing essence of Smash purified by Misora Isurugi, Soichi's mysterious daughter.

It premiered on September 3rd, 2017, after Kamen Rider Ex-Aid finished its run; and it aired alongside Uchu Sentai Kyuranger, and later, Kaitou Sentai Lupinranger VS Keisatsu Sentai Patranger, on the Super Hero Time block. It ended on August 26, 2018, and was succeeded by Kamen Rider Zi-O.

Voted #5 series in the Heisei era and #5 product overall in NHK’s All Kamen Rider Popularity Vote.

Now, shall we begin listing these tropes?

"The law of victory has been decided!"