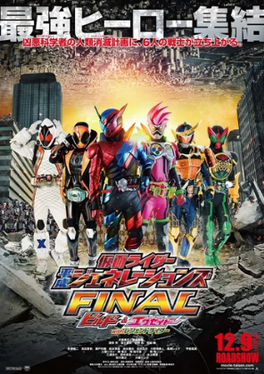 Besides featuring Kamen Rider Ex-Aid and Kamen Rider Build, this film also marks the return of several veteran Riders: OOO, Fourze, Gaim, and Ghost. The name suggests that it was intended be the last Heisei era Movie War film due to diminishing box office returns and the then-upcoming abdication of Emperor Akihito (Heisei); what actually happened requires a bit of explaining. note As the movie was being developed, Akihito's abdication was seen as almost certain, but a specific date wasn't announced; nevertheless, the movie was titled as such due to Ex-Aid still having a bit to go when the abdication was approved by the Japanese Diet. The date was announced a week before this movie's release as April 30, 2019; well into the run of the season after Build and, presumably, later than Toei expected. Ultimately, Kamen Rider Zi-O would be announced as the final Heisei Rider, along with the actual final entry in the Heisei-era film series: Heisei Generations FOREVER.

Trouble strikes the parallel worlds of Build and Ex-Aid when a new enemy, Bugsters infused with Nebula Gas, appears and begins attacking the populace. Sento Kiryu, Kamen Rider Build, fights them off using a mysterious power he thought was only a dream, while Emu Hojo can't become Kamen Rider Ex-Aid because a mysterious Kamen Rider appeared and drained his powers a week earlier. As the two worlds begin to collide, it'll take the combined efforts of Sento, Emu, their allies and their Rider precursors to save everyone.

Tropes exclusive to this movie: