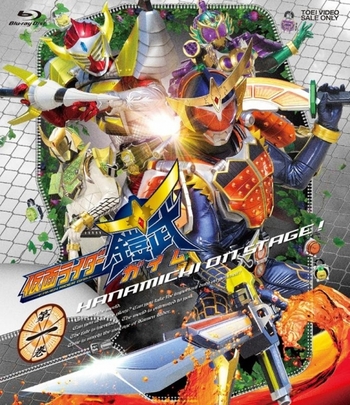 The Warring Era of Kamen Riders!
"Pluck the fruit of heaven. That the world will be dyed in your colors."
Advertisement:

Kamen Rider Gaim is the 2013-2014 Kamen Rider series; the fifteenth entry in the franchise's Heisei era and the twenty-fourth series overall. The head writer is Gen Urobuchi of Fate/Zero, Puella Magi Madoka Magica and Psycho-Pass fame, with his fellow nitro+ staff members contributing to the writing and designsnote Although Gaim media does not officially hold the nitro+ label, the company has acknowledged it as one of their coproductions.

In Zawame City, the suffocating presence of the Yggdrasill Corporation has led to the city's youth forming competing street-dance crews as a way to bring energy and excitement back into their lives.

Another popular activity is a Mons game that uses fruit and nut-themed padlocks called Lockseeds to summon tiny creatures called "Inves". As the game becomes more and more popular, strange dimensional tears begin to open around the city to the mysterious Helheim Forest. When an Inves consumes a fruit from this forest, there is a chance of it evolving into a more powerful form but at the risk of losing all control and going on a hunger-induced rampage.

Kouta Kazuraba is an earnest young man who quits his dance crew - Team Gaim - so that he can find a job and support his sister. When he is caught up in the attack of a berserk Inves, Kouta stumbles upon a strange transformation belt and Lockseed, which he uses to transform into "Armored Rider Gaim" and defend his friends and the city.

However, it is not as simple as that. There are many other Armored Riders in the city with their own motivations and sense of justice, and soon a modern version of the Warring States Era erupts between the masked warriors. One where even the winners will learn that with power comes the need to make ugly choices...

Voted #10 series in the Heisei era and #12 product overall in NHK’s All Kamen Rider Popularity Vote.

This is my trope now!

While testing out the Peach Energy Lockseed, Kouta discovers that it gives him the ability to hear things that he'd otherwise never be able to normally. It comes in handy later on, despite Jimber Peach Arms being a non-combat form.

While testing out the Peach Energy Lockseed, Kouta discovers that it gives him the ability to hear things that he'd otherwise never be able to normally. It comes in handy later on, despite Jimber Peach Arms being a non-combat form.