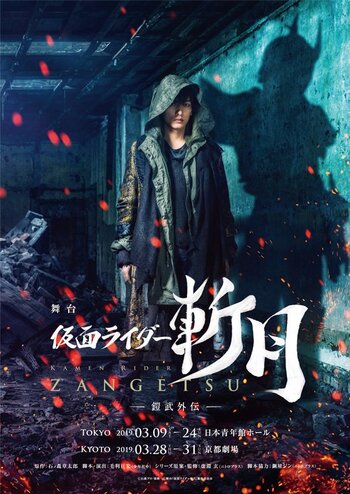 Kamen Rider Zangetsu -Gaim Gaiden- is a 2019 stage play Spin-Off of the Japanese television series Kamen Rider Gaim, later released on DVD. Actor Yuki Kubota reprises his role as Takatora Kureshima/Armored Rider Zangetsu in this story co-authored by Nitro Plus's Jin Haganeya and Nobuhiro Mouri, both of whom were secondary writers on the Gaim TV series (with Haganeya serving as assistant to the show's head writer, Gen Urobuchi).

Several years after fighting off the Helheim Forest invasion, Takatora Kureshima is traveling the world, cleaning up the messes left behind by the now-dissolved Yggdrasil Corporation. While investigating their former test site in the Trokia Republic, he's shot by a mysterious assailant and falls into the Underground City, where young men are given Sengoku Drivers and Lockseeds and forced to fight to the death for the amusement of the ruling elites. Stricken with amnesia, Takatora must slowly recover his memories and unravel the dark secrets behind the republic — as well as the identity of the Revenge-obsessed man who attacked him.

WARNING: This play assumes that the audience already watched Kamen Rider Gaim, since endgame events and plotpoints are important to the story. Therefore, spoilers for Gaim will be unmarked. You have been warned!