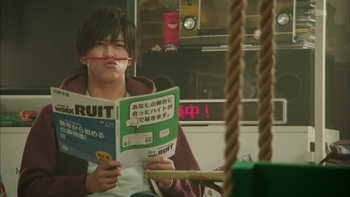 Ladies and gentleman, our hero.
Advertisement:

There's no question of Kamen Rider Gaim being one of, if not the darkest, most terrifying and emotionally-draining series in the whole of the Neo-Heisei era. But that doesn't mean that it can't have plenty of laughter-inducing moments to break up the tension from time to time.