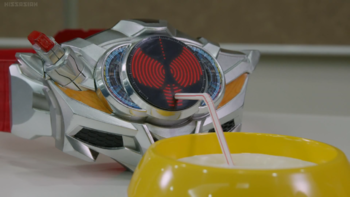 Yes, the belt is drinking out of a doggie bowl.
Advertisement:
open/close all folders

Episode 1: Why Did My Time Stop?
Episode 2: What Is A Kamen Rider?
Episode 3: Who Stole The Women's Smile?
Advertisement:
Episode 4: What is That Prideful Chaser Thinking?
Episode 5: What Are The Steel Robbers After?
Episode 6: What Does The Warrior Fight For?
Episode 7: How Was The Pivotal Moment Captured?
Episode 8: What Is The Secret That Dwells In The Heart?
Advertisement:
Episode 9: How Can I Get Used To The Cool Body?
Episode 10: What Happened In The Belt's Past?
Episode 11: Who Can Prevent The Unholy Night?
Episode 12: Where Did That White Rider Come From?
Episode 13: Why Won't My Little Brother Put On The Brakes?
Episode 14: Who Is The Black Shadow Chasing Her?
Episode 15: When Will These Feelings Reach You?
Episode 16: Why Is Rinna Sawagami Nervous?
Episode 17: Who Will Control Deadheat?
Episode 18: Why Is Lt. Otta Following Him?
Episode 19: What Can Judge The Police?
Episode 20: When Did Kyu Saijo Become A Roidmude?
Episode 21: What Can Be Said About The Irregular Death?
Episode 22: How Can I Use The F 1 Body To Fight?
Episode 23: Who Can Stop The Wicked Smile?
Shuriken Sentai Ninninger VS Kamen Rider Drive Spring Break Combining Special
Episode 25: Why Has The Battle Changed Like This?
Episode 26: Where Is Chaser Heading?
Episode 27: What is Go Shijima's Reason for Fighting?
Episode 28: Why Were The Families Targeted?
Episode 29: What Really Happened To The Robbery Event?
Episode 30: Who Can Expose The Culprit?
Episode 31: Why Did The Important Memories Disappear?
Episode 32: What Awaits At The End of Evolution?
Episode 33: Who Stole the Life of Shinnosuke Tomari?
Episode 34: Who Stole The Life Of Eisuke Tomari?
Episode 35: Why Did The Siege Happen?
Episode 36: Where On The Side of Justice Will The Bullet Fall?
Episode 37: Who Is Aiming For The Ultimate Taste?
Episode 39: When Will The Tornado Kidnapper Attack?
Episode 40: Why Are The Two Geniuses Having A Conflict?
Episode 41: How was The Golden Drive created?
Episode 43: When Will The Second Global Freeze Take Place?
Episode 44: Who Loved Heart The Most?
Episode 46: Why Must They Fight?
Episode 47: Who Will You Entrust the Future to, My Friend?