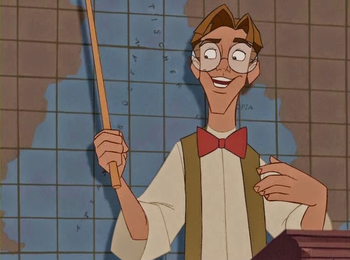 Societal norms would seem to suggest that this is the opposite of the (Western) ideal man or woman; in reality, many fans find these characters appealing: rather than an over-the-top caricature, these characters are enjoyable and relatable because they're not absurd supermen or unattainable supermodels. However, a hardened or attractive character can still be seen as Adorkable by the audience if they display traits like shyness or awkwardness underneath their exterior.

This term has become increasingly common in use, and can nowadays be heard at a higher frequency in movies and on the internet, to the point that it's now appeared

Note that this is an audience reaction to certain characters—Endearingly Dorky is for when characters within the work find a dorky person endearing, charming, or even attractive. Compare Moe, where an adorable character instills feelings of protectiveness.

Despite being awkward, unable to express himself, and even a bit clumsy with words, Blu is very softhearted and sweet.

Despite being awkward, unable to express himself, and even a bit clumsy with words, Blu is very softhearted and sweet.