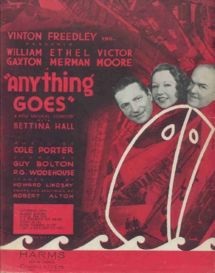 Reno Sweeney: They think he's Gangster # 1,
So they made him the favorite son!
And that goes to show
Anything Goes!
Advertisement:

A musical first performed in 1934 with songs by Cole Porter and a book by Guy Bolton and P. G. Wodehouse. Anything Goes takes place aboard a transatlantic cruise and follows the antics of a number of unusual passengers, including evangelist-turned-nightclub singer Reno Sweeney (originally played by Ethel Merman), hapless would-be gangster "Moonface" Martin, disguised as a pastor (originally played by Victor Moore), and Billy, a self-described "broken down stockbroker" who stowed away in the hopes of thwarting his girlfriend Hope's Arranged Marriage to Upper-Class Twit Evelyn Oakley. Famous songs from the show include the title song, as well as "You're the Top" and "I Get a Kick Out of You". "Friendship" is also well known, but it's not originally from this show.

It received major revivals on Broadway twice, first in the 1960s in a version that interpolated songs from a number of Porter's other shows, and again in the 1980s in a version that stayed closer to the original musical in terms of songs, although not necessarily in terms of script. A third Broadway revival came out in 2011, based on the 1980s revival. It won the Tony Award for Best Revival of a Musical.

Not to be confused with the opening theme for Kamen Rider OOO. Or the style of martial arts practiced by Ranma ½.