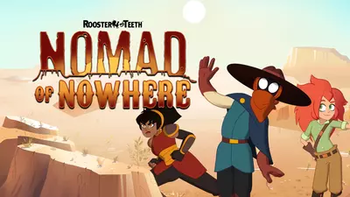 Nomad of Nowhere is a 2D Western-Fantasy animated web series from Rooster Teeth, created by Georden Whitman and directed by Jordan Cwierz, the latter of whom took on the role of showrunner following Witman's departure from the studio.

The series tells the story of the titular nomad, an infamous magic user with no name that has gone unseen for over a century, with only legends of his great and terrible powers being known. As such, no one is sure if the Bounty Hunter Toth and her crew, the Dandy Lions, are on a wild goose chase or not... at least until Skout, Toth's loyal spittoon girl and admirer, casually stumbles across him in a bramble forest. And what she finds is not a scary monster, but a sad and lonely Cute Mute who only wishes to use his ability to animate inanimate objects to make friends. Thus begins a journey across the desolate wastelands of Nowhere, as the Nomad tries to recollect his past and find companionship, Toth and other bounty hunters endeavor to capture him for their own purposes, and Skout comes to terms with exactly what side of this whole mess she wants to be on.

The show premiered in March 2018, with the first season ending in September that same year. A second season was put into production, with script writing getting "pretty far along", before being halted due to Rooster Teeth's restructuring in the wake of the WarnerMedia merger, and writing and animation staff were moved to other projects at RT such as RWBY. In September 2020, Cwierz casually name-dropped

Nomad as one of several shows that the company was looking to find a production partner for.

Tropes presented in the series: