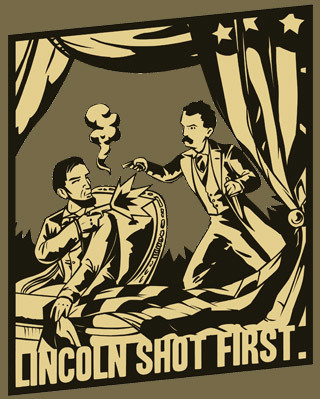 (referring to the destruction of Alderaan in A New Hope)
Advertisement:

A form of characterization resulting from Executive Meddling used to prevent a hero character from seeming too sadistic. Normally, the original scene is a typical example of Shoot the Dog; in the edited version of the scene, it's basically self-defense meets Karmic Death, even if the original shooting was in self-defense. Some call it Bowdlerising, some call it necessary, and it has spawned the "Han Shot First"

Goodie and Baddie struggle on edge of building. Baddie winds up hanging from the arm of Goodie. Baddie shoots at Goodie while hanging onto his arm; Goodie, while dodging the bullet, is forced to let the Baddie fall.

Sometimes this trope comes into play without Executive Meddling. The writer assumes that the audience will lose sympathy with a hero who kills preemptively (and in some case might be accurate, if the audience feels the hero was portrayed in a way that such an action would be against character).

For other ways to accomplish something unpleasant while keeping the hero's hands clean, see Bad Guys Do the Dirty Work or Poisonous Friend.

Contrast Self-Defense Ruse, where a person falsely claims to have committed a crime in self-defense.