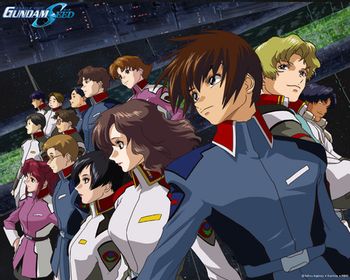 Each generation plants a seed. Will it ever yield more than violence and greed?
"You have the power to make a difference, don't you? Then why not put it to good use?"
— Mu La Flaga, "Phase 04: Silent Run"
Advertisement:

Mobile Suit Gundam SEED, which aired from 2002 to 2003, is the ninth television installment of the long-running Gundam franchise and the first to be set in the Cosmic Era Alternate Universe. Occasionally considered a Remake of the original Mobile Suit Gundam adapted for modern audiences due to the similarities of the first half of the plot, it none the less manages to stand on its own due to the vastly different nature of the setting and its primary conflict, as well as the completely original second half of the storyline.

The story premise matches the standard Gundam fare by featuring a conflict between Earth and Space, but introduces an original twist in the form of widespread use of LEGO Genetics. Genetic modification of humans is illegal on Earth, but the space colonies are populated almost exclusively by an artificially enhanced breed of humanity known as Coordinators. Most of Earth falls under the authority of the Earth Alliance, which funded the construction of the PLANTs (huge, hourglass-shaped space colonies meant for use as orbital manufacturing and R&D centers); however, the Coordinators now living on the PLANTs seek independence from the Earth Alliance via the formation of a militia group called ZAFT. This basic conflict of interest, combined with the Fantastic Racism between the genetically engineered Coordinators and the unenhanced Naturals, eventually sparks a war between the Earth Alliance and ZAFT, that opens with a nuclear assault on a PLANT and only gets worse from thereon out. Meanwhile, the nations on Earth not falling under the umbrella of the Earth Alliance are forced to take sides or else risk the ire of both opposing factions.

Enter The Hero; Kira Yamato, a young Coordinator attending a technical college on Heliopolis, a space colony of the neutral nation Orb. Inevitably drawn into the conflict against his will, he Falls Into The Cockpit during an attempted Gundamjacking and ends up being the only thing standing between his friends and a messy death at the hands of ZAFT. Complicating things is Kira's Forgotten Childhood Friend Athrun Zala, a fellow Coordinator who joined ZAFT and now finds himself on the opposite side of the battlefield as his old friend. While the story may appear a bit monotonous at the beginning (due largely to Recap Episodes and Stock Footage), after the Wham Episode halfway through the series, the show turns into a kaleidoscope of battles, revelations, and deaths, skyrocketing the intensity all the way into the stratosphere. A full recap is under construction here.

Thanks to its powerful directing, an all-star voice cast, and the never-dwindling emotional tension, SEED easily became a smash hit in Japan, getting the second highest ratings in Gundam history only behind Zeta Gundam and spawning a televised sequel, Mobile Suit Gundam SEED Destiny, and a manga spinoff, Gundam SEED Astray. An as of yet untitled movie, announced in 2006, is expected to be a Grand Finale of the saga...if it can leave Development Hell. SEED's success and the announcement of Destiny, the first-ever full-length television sequel to a Gundam show outside of the original Universal Century timeline, spawned speculation that CE would become the new UC. However, Destiny failing to be as successful as SEED, the movie's production stalling (due to, among other things, illness and subsequent passing away of the head writer Chiaki Morosawa in 2016) and the subsequent release and success of non-CE series Gundam 00 have since dashed those hopes. The 48-episode run of the HD remaster of the series aired in 2012.note If you're wondering why it's two episodes shorter, the remaster cut out two recap episodes, which were the original 14th & 26th episodes. In 2017, it was announced that the HD Remaster of both SEED and SEED Destiny would be receiving English dubs from NYAV Post. The Remaster of SEED has been announced to have a release date of December 2020.

During the opening ceremony for the life-size Freedom Gundam statue in Shanghai, Bandai Namco Entertainment announced the Mobile Suit Gundam SEED PROJECT ignited initiative for SEED's 20th Anniversary, which will be headlined by the previously mentioned movie (which is finally stated to be in production) and followed up by a new manga titled Mobile Suit Gundam SEED ECLIPSE and a currently untitled video game project.

Example of:
No Power, No Color