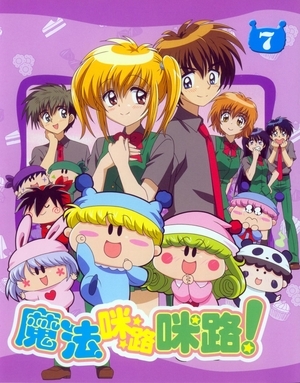 Mirumo de Pon! (or Mirmo!) is a Shōjo Manga series written by Hiromu Shinozuka. It was serialized in Ciao magazine from 2001 through 2006, and later published in twelve collected volumes by Shogakukan. The manga series was awarded the 2003 Kodansha Manga Award and the 2004 Shogakukan Manga Award for children's manga.

The manga was also adapted to an anime by Studio Hibari, premiering in Japan on TV Tokyo on April 6, 2002 and running for 172 episodes until its conclusion on September 27, 2005.

The story follows the exploits of the Mirumo (Mirmo in the English version), the fairy prince of the fairy world intent to escape to avoid his Arranged Marriage. Tricking Kaede Minami (Katie Minami in the English version), an energetic eight grader into summoning him on the prospect of being able to wish for the returned feelings of her crush. The series culminate in the misadventures of Mirumo and Kaede, avoiding having Mirumo returned to the fairy world while also facing innumerable other issues.