Not With the Safety On, You Won't 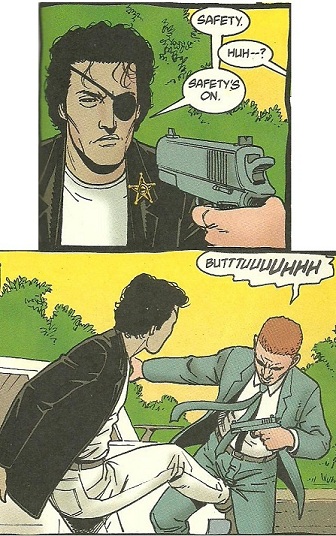 Ah, the old "safety's on" distraction; it's like buttUUUHHH...
Zeus: You call in that code right now or I'll blow your sick ass into the next world.
Simon Gruber: Well, if that's what you gotta do.
[click...click click...click]
Simon Gruber: [calmly takes gun, releases safety] You forgot to take the safety catch off. [shoots Zeus in the leg] See, that works.
— Die Hard with a Vengeance
Advertisement:

If guns are featured in a movie, and someone inexperienced takes to using one (the Damsel in Distress or similar character), there's a good chance of this phrase being uttered. There are three versions:

In the first case, the character being held up might use it as a ruse to try to wrong-foot his opponent. Usually in this instance the character at gunpoint is a veteran, his savvy attitude being contrasted to his inexperienced opponent. It is extremely rare for the opponent to call his bluff; instead he will usually tilt his gun and look down to check if the safety is on, letting the other person get the drop on him. Note that in this case the safety need not actually be on; all that's necessary is to trick the guy holding the gun into checking.

In the second, the person at gunpoint is generally a villain and the one holding the gun an inexperienced good guy; in this case, the villain will grab the gun after it fails to fire, mocking his opponent for their lack of expertise only afterward.

The third example is when a Magnificent Bastard is on the other end of the gun along with some other villain. Once the other guy is knocked out and the hero is securing him, he'll casually comment that you can't fire a gun with the safety on, and that 'next time' the hero should check first; thus showing that really he was just going along with it because it suited him and enhancing his Magnificent Bastardry.

Variations exist; it might be that the gun is recognizably jammed, is physically impossible to fire at the target for some reason, would kill both of them if fired, is not cocked, or even is not loaded. Note that in Real Life, any (competent) gun user or owner will leave the safety on until ready to fire, and especially make sure the safety is engaged if they are going to hand it to someone else. In addition, nearly all revolvers and many automatic pistols (Glock, Sig and others) do not feature a safety catch, relying on internal mechanisms and a strong trigger pull.

When the safety has been deliberately left on in case the weapon gets stolen, the person stealing it may find It Works Better with Bullets.

The inverse sometimes shows up in movies where a gun is fired with the safety on, presumably to keep actors from death by blank. This annoys gun nuts; the appropriate special effects hide the phenomenon from other viewers.