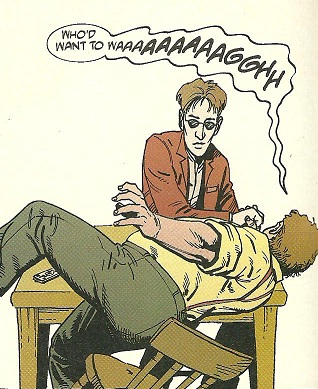 "...I'm sorry, have you two already started?"
— Superman (arm-wrestling the gods Samson and Atlas at the same time

Somehow, in some over the top fashion, a situation has arisen that can only be solved by one character arm wrestling another. This will almost always result in a character who appears scrawny having to arm wrestle a man far larger than they are.

This never favors the big man, since almost as often, the character only appears scrawny, and is in fact a not so harmless Cute Bruiser, or otherwise ends up being more powerful than they look. Expect some to take full advantage of this misconception to make money, get revenge, or just show off.

Even with Kanna being a dragon, she's no match for a former goddess like Lucoa.

Even with Kanna being a dragon, she's no match for a former goddess like Lucoa.