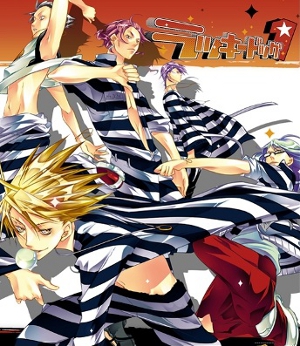 Lucky Dog 1 is a Boys' Love doujin Visual Novel by the company Tennenouji. The art is drawn by Yura, who is also well-known for her work on Enzai and Absolute Obedience.

Set in 1930s America, it's about a particularly hot Mafia group called the CR-5. At the beginning of the game, they're stuck in prison, until the protagonist, Giancarlo Bourbon del Monte (mostly known as "Gian"), finds out that he can become the CR-5's boss if he manages to break them all out successfully. With his cohorts Giulio di Bondone, Ivan Fiore, Bernardo Ortolani and Luchino Gregoretti, he (hopefully) makes it out of prison intact, and to his hometown known as Daivan. The plot then chronicles his life with whatever character you choose to pursue, and whether or not Gian makes it into his position or not.

After the first game's commercial success, there has been two more spin-offs released, titled Gian Carlo's Lucky Happy Life and Gian no Tamenara Sekai wo Kowasu, with a planned (but as of yet unreleased) sequel/expansion pack titled Lucky Dog 1 +bad egg. There is also an ongoing manga adaptation called Lucky Dog 1 BLAST, which appears to be focusing more on the storyline from the original game. A fan translation

is currently rendering the first game's script into English proper.

plans to release an official translation in the future. A release date for the English version has not been confirmed at this time.