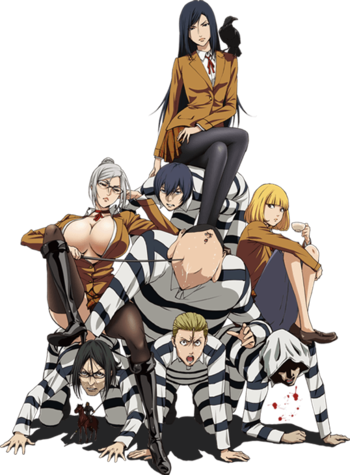 Being one of the few boys in a female-majority school is surely a paradise... right?
Advertisement:

Hachimitsu Private Academy is an elite all-girls boarding school infamous for its draconian rules and harsh penal code. When five boys — Kiyoshi Fujino, Takehito "Gakuto" Morokuzu, Shingo Wakamoto, Jouji "Joe" Nezo and Reiji "Andre" Andou — are admitted as part of a new co-ed program, the girls seem to give them the cold shoulder. Unbeknown to them, the notorious and powerful "Underground Student Council" of Hachimitsu— misandric president Mari Kurihara, sadistic vice-president Meiko Shiraki, and cute but abusive secretary Hana Midorikawa— have issued an edict forbidding any communication between the genders.

Soon enough, the boys find themselves in trouble when they are caught peeping on the girls' baths. They are sentenced to one month of jail time in a giant prison inexplicably located at the centre of the campus, where they will undergo a "rehabilitation program" devised by the Underground Student Council. Can the boys survive a month of physical, mental and emotional abuse without losing their minds?

The series received an anime adaptation by JC Staff for the Summer 2015 season, and has received a live-action series in October 2015. Weekly publications for the manga ended on Dec 25, 2017, making a total of 277 chapters. An epilogue chapter for the series was published in April 2018 coinciding with the release of the final volume.