Fanfic / Neither a Bird nor a Plane, it's Deku! 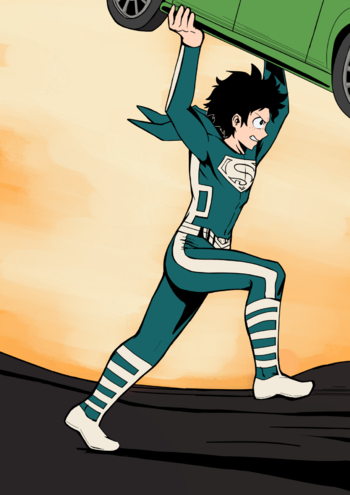 "You probably figured it out already, but that baby they're with? That's me. My name is Izuku, and I'm an alien."note All credit for the art goes to its original owners

"A young boy learns to fly with the world beneath his wings."
—The story's Tagline
Advertisement:

Inko and Hisashi Midoriya are on a camping trip by Lake Kawaguchi, one of the Five Lakes of Mt. Fuji, to get away from the world after learning that they are unable to produce the child they always wanted. That evening, the couple see a fireball streak through the sky, following it to find a crashed spaceship with a crying baby inside. Believing it to be more than just mere coincidence, Inko insists that they take this child as their own regardless of the risks, overruling her husband's protests. And so, the baby alien became one Izuku Midoriya, destined to become the world's greatest hero.

Here's the catch: in this universe, he doesn't want to become a hero... At least at first.

Neither a Bird nor a Plane, it's Deku! is a My Hero Academia Fusion Fic written by FoxOnPie. In an Alternate Universe where both DC Comics characters and concepts collide with the world of My Hero Academia, it follows the road Izuku takes to become a Hero as an adopted Kryptonian child rather than a simple Quirkless boy, having a serious impact on his development and outlook on the world as a budding Superman in the making.

It can be read on AO3

Neither a Bird nor a Plane, it's Deku! provides examples of: