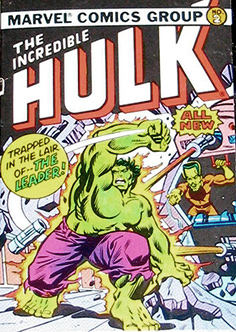 HULK SMASH EVIL SCIENCE!
"As far as brains go, I got the lion's share, but when it comes to brute strength... I'm afraid I'm at the shallow end of the gene pool."
— Scar, The Lion King (1994)
Advertisement:

This often conveys the message that Dumb Is Good: the heroes are straightforward men and women of action, while the bad guys are smarter yet squishier, as if to imply that physical strength represents moral strength. Occasionally, the villain is Feigning Intelligence, the hero is playing dumb, or the hero just holds the Idiot Ball until the climax, when he passes it directly to the villain.

In many cases, this can be a corollary of Villains Act, Heroes React, wherein the Villain has time to set up the evil scheme, after which a Hero, often caught on the back foot, must overcome the odds with superior combative capabilities, in order to foil the scheme before it's too late. As a result, Villains tend to be schemers and manipulators, while Heroes tend to be more individually combative types.

A more idealistic interpretation is that this trope is the aftereffect or pre-establishing of Right Makes Might, i.e. "Right has already made might."

Since it follows that qualifications in fighting/military leadership are therefore nobler than academic ones, see The Good Captain and Morally Ambiguous Doctorate.

The most common Sub-Trope of Brains Versus Brawn. Often leads to Armored Villains, Unarmored Heroes and/or Polite Villains, Rude Heroes. This is the classic matchup in Sword and Sorcery and other forms of Heroic Fantasy, where the sword will typically be wielded by a Barbarian Hero (who, even if they're not outright stupid, will generally be at least Book Dumb) and the sorcery will be in the withered hands of an Evil Sorcerer marinated in forbidden lore. Contrast Guile Hero and Science Hero, who often overcome physically threatening foes with trickery or brainpower respectively; and Evil Is Bigger, where the villain is physically superior to the hero.