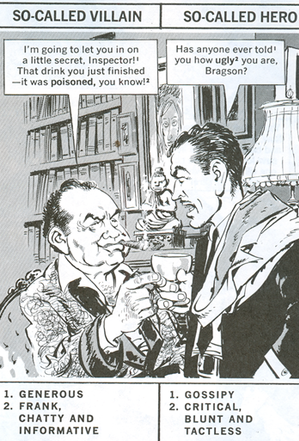 Nicodemus: What would you say if I told you that you and I might have a great many common interests in the future?
Harry: I wouldn't say much of anything. I would be too busy laughing in your face.
— Small Favor, The Dresden Files
Advertisement:

Sometimes Good Is Not Nice, hence a hero can be obnoxious and rude. Similarly, sometimes a villain could be friendly, polite, and Affably Evil. When either or both of these work their way into to the tone of a conversation between a hero and a villain, you end up with conversations in which the villains sound more respectful than the heroes.

Depending on how this is treated in the context of a story, it could serve as a Pet the Dog moment, or alternatively, it could serve as a sign that the villains really, REALLY don't deserve respect and hence the heroes will not give it to them. Then again, that would by its very nature imply the villain's at least humble enough to be polite to the heroes... or at least not too proud to pretend to be.

Can be a sign that Evil Cannot Comprehend Good — the villain sees the hero as a Worthy Opponent who happens to be working at cross-purposes to him, but doesn't understand the hero's visceral hatred of everything he stands for. It can also be a character flaw for the Anti-Hero, who when confronted by evil may act so tactlessly as to seriously disgrace his own reputation. A particularly common trait of the Villain with Good Publicity, and also one that contributes to the Hero with Bad Publicity, as people will tend to judge you by how they see you act, regardless of your reasons.

Can also be used to emphasize that the villain has held power for a long time already and he feels very confident that the status quo will continue. In that case, any major success by the hero may trigger a Villainous Breakdown later in the story. (Conversely, a hero may be rude because he knows the odds are against him and feels threatened, and later in the story he becomes more polite once he feels sure that he's going to win.)

Or, from a storyteller perspective, it can just be due to simple Catharsis Factor. After all, it's fun to get to spit your defiance in Evil's face! Having Evil spit right back would just ruin it. Though if the villains are more sympathetic enough, the heroes will attempt to Save the Villain in the end of the climax.

Sometimes, rather than marking the villain as Affably Evil, the moral is that actions speak louder than words; while the villain in the picture might be speaking courteously, there is the small matter that he is still committing some extremely evil deed, making him more Faux Affably Evil. Some works take it so far that the moral seems to be "politeness is deceptive, bluntness is honest" — a message that all those Reality Show contestants who "speak [their] mind and don't care what anyone thinks" must have taken to heart.

See also Soft-Spoken Sadist. Ugly Hero, Good-Looking Villain is this applied to looks. A Wicked Cultured villain may view rudeness as beneath him.