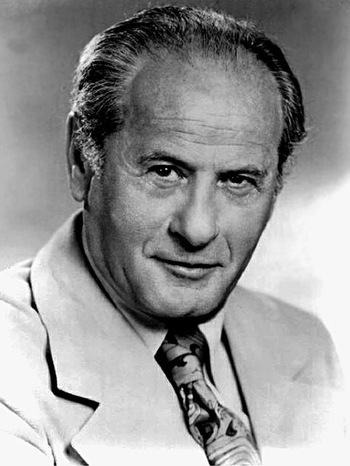 "Everyone thinks acting is easy. It's far from easy, but it's the most gratifying thing I do."
Advertisement:

Eli Herschel Wallach (December 7, 1915 – June 24, 2014) was an American actor who worked in theatre, film, and television over the better part of six decades.

A Jewish boy with Polish immigrant parents, Wallach grew up in New York City's Little Italy, although he spent four years away at the University of Texas. An alumnus of the Actors Studio Method school of acting, Wallach had a prestigious career on the stage, which he had a particular affinity for, although he had plenty of roles in film and television. He was best known to some for being in seven Western movies: The Magnificent Seven (1960), How the West Was Won, The Good, the Bad and the Ugly, Ace High, Mackenna's Gold, Don't Turn the Other Cheek! and The White The Yellow And The Black.

After he met his future wife Anne Jackson in 1946, the two became known as a double act on Broadway, appearing in many plays together such as This Property Is Condemned, The Rose Tattoo, Rhinoceros, Luv, Lullaby, The Teahouse of the August Moon, The Typists and The Tiger. He and Jackson remained happily married until his passing from natural causes in 2014.

He was the healthiest cast member of The Misfits and the last surviving star of the film.

Though won Tonys and Emmys throughout his career, he was never nominated for any Academy Awards.

He was also the third Mr. Freeze in the 1960s Batman series, and received the most fan mail out of all his characters for it.

Tropes that apply to the actor: