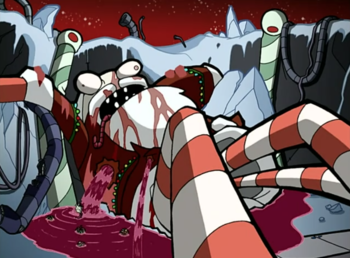 Lovecraft Christmas to all, and to all an End of the World as We Know It!
My name is Claus, king of kings;
Look on my toys, ye Mighty, and despair!
— Description of Santa's dominion, Cookie Clicker
Advertisement:

Santa Claus is an unusual man, ain't he? He's a spaceless, timeless immortal male senior citizen that seems to change his name and ethnicity depending on whatever country he exists in. He is omniscient (how else would he know if you've been bad or good?) and omnipresent (he can drop the right selection of gifts in every house on the planet with no one ever seeing him despite being a fat man apparently getting in through the chimney) and he can survive things that should kill a normal man his age (eating everybody's cookies and milk, living in the inhospitable wastes of the Northern hemisphere, nearly getting shot down by the U.S. military every year for being an unregistered airborne entity, etc).

Often times this trope applies to Santa if it involves less the Christian side of Christmas (that is unless Yahweh is more the eldritch-horror type unsurprisingly) and more with the various Pagan traditions that apply to the holiday, various rituals of protection that have long since lost their original purpose over the years and have become modern Christmas traditions, meaning that the fundamentalists were right and Santa is a Pagan idol that could possibly destroy the Earth. Children don't give him milk and cookies as a "please and thank you" for the presents; they are offerings to appease his ever-slumbering rage, waiting for the day when he rains jolly doom upon the world. After all, "Santa" is an anagram of "Satan"...

Now the kind of Eldritch Abomination would depend on the kind of traditions that would placate him. As a Humanoid Abomination, it is pretty much self-explanatory. The fact that he is able to survive whatever diabetic coma that keeps him away the other 364 days of the year speaks for itself. As an Animalistic Abomination, he does not have flying reindeer pulling the sleigh, he is the flying reindeer, or at least some kind of Yule-Goat commonly confused for his more malicious counterpart. As a Botanical Abomination, Christmas trees can act as an effigy in its likeness, the various Christmas ornaments his many eyes or eggs or something. As a Mechanical Abomination, toys and holiday themed appliances spring to life as monstrous predators or violent soldiers that cause chaos and destruction wherever they go.

Oftentimes, this overlaps with Bad Santa and The Krampus. Compare Badass Santa and The Grinch. See also Adaptational Abomination, Adorable Abomination and Did We Just Have Tea with Cthulhu?.

Picture a hideous, blue skinned, demonic cross between Santa and Krampus who is constantly drooling blood that is implied to be toxic. He also swallows people whole and regurgitates them as lumps of coal.

Picture a hideous, blue skinned, demonic cross between Santa and Krampus who is constantly drooling blood that is implied to be toxic. He also swallows people whole and regurgitates them as lumps of coal.