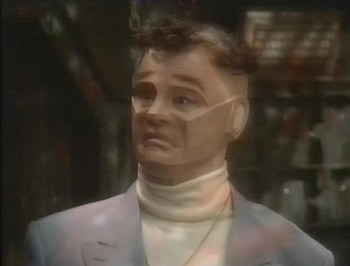 Better anything than that toupee!
Advertisement:

Red Dwarf has been lost entirely at this point, leaving morale on the floor for the Starbug crew. Rimmer holds a "morale meeting", which is a thinly-veiled excuse to angrily state how much he hates the others. Their situation is finally starting to get to them.

Thankfully, they're distracting by the auto-pilot. They're heading straight into a cloud of stellar fog, and they're barely in for thirty seconds before there's a jolt that knocks Lister out. They take him in for medical treatment, only to discover to their shock that Lister's innards are entirely mechanical - he's a droid! Kryten feels betrayed that the human he looked up to is in fact an earlier model with his memories altered, not to mention the fact he's been doing a subordinate's laundry for four years, so he lumbers Lister with the laundry and cooking and takes his seat in the cockpit. However, as they resume their journey, they experience another jolt. Kryten uses the database to discover that the stellar fog is being used to create "unreality pockets" in space to protect a Space Corps derelict. So Lister's not a droid. Whoops.

With the status quo restored, they continue onwards to find the derelict, but the unreality pockets continue to disorient and freak them out. With three day's travel ahead of them, Kryten installs a temporary stasis-seal on both deep sleep units so they can get through safely. When they arrive, they discover the ship is from the twenty-eighth century and is capable of time travel. The crew died during an excursion to the 20th century, so they sent the ship into deep space to prevent it falling into the wrong hands. And those hands happen to be our "heroes".

They install the drive into Starbug's engines, but they soon find that while they can travel in time, they can not travel in space, so they're still marooned in deep space, just in a different century. They return to their time, only to be immediately hailed by another Starbug - it's them from the future! Kryten sends the others to the mid-section so they won't learn their futures, while he plans to erase his memory. Unfortunately, the news of Lister's fate strikes him so badly that he can't help but accidentally let slip that something has happened to him.

Lister, Rimmer and Cat are locked in the ops room, but Lister rigs the security cameras to the medi-scan so they can witness their arrival. They are not thrilled by what they see. Rimmer is morbidly obese, Cat is going bald, Kryten is wearing a leisure suit, toupee and fake eyebrows, and Lister is just a brain in a jar! Kryten has dinner with their doppelgangers, but all are disgusted to learn that their future selves live a totally depraved lifestyle - only wanting to sample the best of everything history had to offer, all four display disturbingly blase attitudes about the fact they're now good friends with people like Herman Goering and the Hitlers.

Having seen enough, Lister blasts his way out of the ops room and orders their future to vamoose. The future selves retreat to their Starbug, but it isn't long before they start firing a laser at them, and they send a threatening message. They have no intention to live without the Time Drive, so either cough up the data they need to fix theirs, or they'll blow them up, killing them all in the process.

Caught between the proverbial rock and hard place, Rimmer asks if they stand a chance. Kryten confirms they don't.

Rimmer gives the order to fight.

For once, all are in agreement, and they fight back. They get off a few good shots, but in the heat of battle, Lister's console explodes, and he's killed instantly. Rimmer then learns that the hull is about to go, and a second later, Cat's controls blow up in his face, and he's killed, too. Kryten offers a beacon of hope announcing, "But there may be a - " Sadly, his station blows up, and he's killed as well. Wrought with emotion, Rimmer begs Kryten to finish his sentence, but then, he works it out for himself. He leaves the cockpit, snatches up a bazookoid and charges into the crumbling corridors. Even a support beam collapsing on him doesn't stop him.

He makes it to the Time Drive. Levels the bazookoid. Loads. Fires. It explodes.

At the exact same moment, a shot from the future crew destroys our Starbug. As in completely destroys it. When the debris clears, there's absolutely nothing left. You'd never know there'd been anything there...

TO BE CONTINUED note ... in several years, as it turned out.

"Out of Time" ends with the apparent death of our heroes and Starbug blowing up, although fans would have to wait several years before they found out what happened next.

"Out of Time" ends with the apparent death of our heroes and Starbug blowing up, although fans would have to wait several years before they found out what happened next.