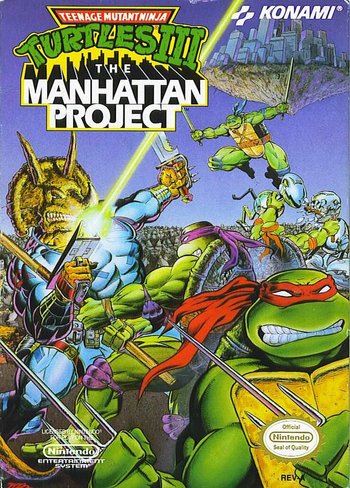 Manhattan's crime rate is up.
Two thousand feet to be exact.
Because Shredder has ripped the island from the face of the Earth.
— Print ad
Advertisement:

Teenage Mutant Ninja Turtles III: The Manhattan Project is a Beat 'em Up by Konami, released exclusively for the Nintendo Entertainment System in 1992.

The Turtles have managed to sneak away to Key West, Florida for a vacation. When watching a news broadcast from New York, it's immediately hijacked by Shredder, who issues a challenge to the Turtles, not only by kidnapping April O'Neil, but also by airlifting Manhattan Island into the sky!

Following the formula of Teenage Mutant Ninja Turtles: The Arcade Game, one or two of the Turtles fight off waves upon waves of Foot Soldiers and other assorted enemies until they reach the end of the Scene, where a boss is fought.

This game also introduced special moves for each Turtle, done by hitting both Attack and Jump at the same time, much as the arcade game does, but these come with a price: one point off the Turtle's life bar per use.

Not to be confused with the 2016 game Teenage Mutant Ninja Turtles: Mutants In Manhattan.