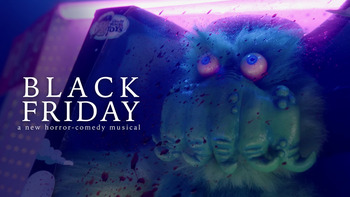 Black Friday is a horror-comedy musical about the shopping day from hell. When the holiday season’s hottest new toy, the Tickle-Me Wiggly, hits the shelves, the city of Hatchetfield goes mad for it, literally. That’s when Tom Houston, Becky Barnes, and Lex Foster, alongside a few familiar faces, must fight through a sea of murderous mall-goers to save humanity from an interdimensional being with a taste for chaos. When Wiggly comes to town, will the world survive Black Friday?

Black Friday is the twelfth of Team Starkid's live shows, and the second set in their Horror Comedy "Hatchetfield universe". It's the second in an unfinished trilogy of Hatchetfield based Apocalyptic Horror comedy musicals, after their wildly popular first Hatchetfield show The Guy Who Didn't Like Musicals, taking place in an Alternate Universe of the same setting as TGWDLM. The live show ran in Los Angeles from October 31–December 8, 2019 at the Hudson Mainstage Theatre, and the filmed version

The third in the trilogy, Nerdy Prudes Must Die!, was announced prior to Black Friday's opening, though without any details. Thanks to the indefinite delay on any new live theatre from Starkid until the end of the COVID-19 Pandemic, Nerdy Prudes Must Die! has been put on hold, as has a short film Spin-Off of The Guy Who Didn't Like Musicals, Workin' Boys. They have managed to produce a Web Video spinoff series known as Nightmare Time.

Also, spoilers for The Guy Who Didn't Like Musicals will be UNMARKED. You have been warned!