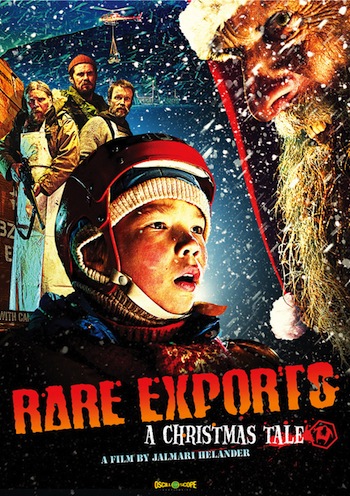 "Rare Exports feels like it could easily be appropriate entertainment for the whole family until the occasional f-bomb gets dropped, mutilated reindeer are found by the dozens, a pick ax winds up in someone’s skull, and naked filthy Santa dong flaps freely in the freezing Scandinavian breeze."
—The Foywonder

Rare Exports: A Christmas Tale is a 2010 Finnish horror film directed by Jalmari Helander. It is based on a series of short films by Jalmari and his brother Juuso.

It's the eve of Christmas in northern Finland, and an 'archeological' dig has just unearthed the real Santa Claus. But this particular Santa isn't the one you want coming to town. When the local children begin mysteriously disappearing, young Pietari and his father Rauno, a reindeer herder and butcher by trade, capture the mythological being and attempt to sell Santa to the misguided leader of the multinational corporation sponsoring the dig. Santa's elves, however, will stop at nothing to free their master from captivity.

This film offers examples of: