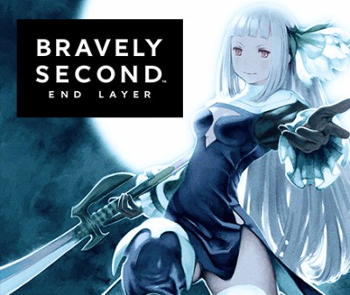 "The courage to try again."
Advertisement:

Three years after the events of Bravely Default, the High Fantasy world of Luxendarc is at last moving towards peace with a treaty signing between the formerly warring factions of the Crystal Orthodoxy and Duchy of Eternia. Unfortunately, this fragile peace is soon destroyed by the newly established Glanz Empire, when its leader, Kaiser Oblivion, kidnaps the Crystal Orthodoxy's Pope, former Warrior of Light Agnès Oblige, and declares war on the rest of the world.

And so it falls to Yew Geneolgia, head of Agnès' personal guard and fanboy of the original Warriors of Light, to rescue Agnès and put an end to Oblivion and his Empire's schemes. Aiding him on this journey are Edea Lee, the leader of the Eternian knights and another of the four Warriors of Light who saved the world two years earlier; Magnolia Arch, a Mysterious Waif hunting for the Eldritch Abomination that destroyed her home; and Tiz Arrior, a third Warrior of Light who fell into a coma soon after the climatic battle of Bravely Default.

The previous game's composer, Revo from Sound Horizon, did not compose Bravely Second's music due to scheduling conflicts. Instead, Ryo from Supercell composed the soundtrack. However, a good number of tracks from the first game do return.

This game is followed by (and not to be confused for) Bravely Default II, which (much like its parent series) is a Non-Linear Sequel set in an entirely new world.