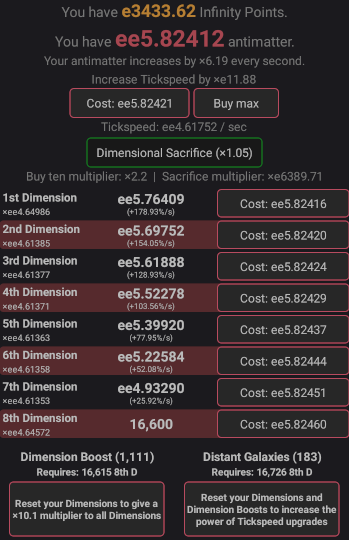 The typical idle game with several characteristic features.
"A game which you can play when you idle, and when you don't."
— Official description for Anti-Idle: The Game
Advertisement:

An Idle Game (also called "incremental game" or "clicker game") is a genre of game defined by the primary feature of its strategy: leaving the game running by itself for long periods of time. This is not necessarily the only way to win; some Idle Games allow and even reward active participation, but if you "win" one, whether there's an actual end or you just got a High Score, most of your gameplay was likely in the form of letting it run while you were asleep, at work, or otherwise not involved. Because active play isn't the primary strategy, sometimes the best 'move' is counter-intuitive — one that provides an immediate benefit to active play doesn't pay off as well in the long run during idle times as another one that has a less-noticeable immediate effect but is more effective during idle play.

Idle Games usually have a concept of buying upgrades that enhance your ability to gain points (whether active, idle, or both), yielding exponential gains that Pinball Scoring can't begin to describe. Upgrade units also tend to have theoretically infinite levels, but their increasing cost causes Diminishing Returns for Balance. More complicated Idle Games tend to have multiple currencies to make the purchasing decisions for upgrades more complex. Many Idle Games also have a prestige system that functions like a New Game+, resetting the game but providing a "prestige" currency that carries over runs to ease subsequent runs, and some take it further by having multiple levels of prestige that reset the levels below it. Some games with these features may downplay the idling gimmick by having mini-games that drive the mechanisms for scoring and\or upgrading, or just by having so many complicated upgrades that the player is constantly busy evaluating and choosing them, but if there is a concept of an escalating point total that goes up over time, it still falls under the "Idle" umbrella.

Frequently, especially on mobile platforms, the game may provide some resource that "speeds up" the process. Charging money to provide this resource or slowing down the game very early on so as to require it is, of course, utterly inconceivable to the developers.

As the genre grows, it's clear that there are several subgenres related to gameplay style as well as goals and progression. Many idle games use Genre Blending (whether they blend multiple subgenres or different gameplay genres with idle game mechanics altogether), so take these with a grain of salt.

Note that certain games have an idle mode (sometimes also called observation mode) that allows the player to sit back and watch the AI play the game. Examples of this would be Unreal Tournament and Europa Universalis.

Not to be confused with idol games. Also not related to Eric Idle.