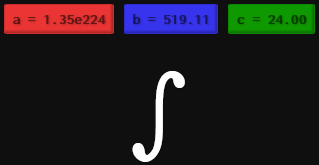 The Formula is an Idle Game by Jacorb 90 released in 2021. It uses The Modding Tree engine that's used for Prestige Tree Rewritten and its mods, but doesn't really feel like them. You have a function called n(t) that increases over time and have to gain A-Power (then more powers later on) once it becomes high enough. When you accomplish goals, you unlock new mechanics and things for the formula. It is available on Githack