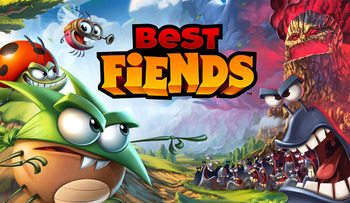 Best Fiends is a connect-3-or-more Puzzle Game with RPG elements. The story is about a meteor crashing into Mount Boom, home to the slugs, which turns most of them into a vicious army that starts taking over the land of Minutia, home of tiny critters who fight back.

The goal of the game is to perform each level's tasks such as beating the slugs, matching enough specific blocks, breaking crates, collecting diamonds, making bombs explode, or any number of other things.

Made by Seriously with the help of Angry Birds developers.

The series also has various CGI web shorts animated by Reel FX Creative Studios, which are released sporadically on the game's YouTube account.