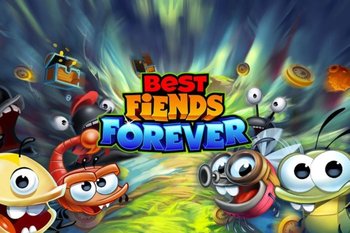 Best Fiends Forever is an Idle Game from Seriously, and the sequel to Best Fiends.
Advertisement:

Like its predecessor, the game takes you through the land of Minutia, defeating slugs on your way to Mt. Boom. Unlike the first game, however, instead of matching symbols to defeat the slugs, the Fiends are on their own attacking them, with the player helping by tapping at the slugs and environment to gain coins that can help level up the Fiends into their adult forms. Even when you’re not playing, the Fiends are fighting, gaining coins even when the app is closed.

Another additional aspect to the game is portals, which starts you back at the beginning of the game, with the catch that you earn a special currency to buy gadgets that help power up your Fiends and gameplay experience.

As of 2020, the game was removed from the App Store for unexplained reasons, possibly due to complaints about people getting cramps from tapping the screen.