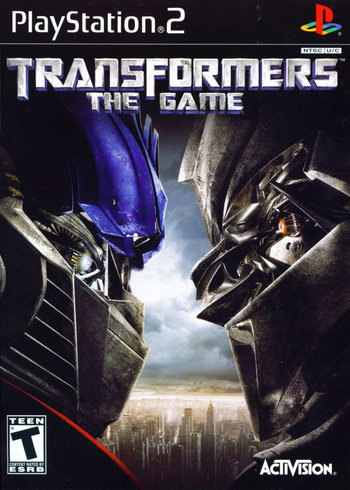 To coincide with the 2007 Transformers movie, Transformers: The Game was released for PC and home consoles in June 2007. It is a Third-Person Shooter with additional focus on melee combat and driving. The game's story, which focuses on the retrieval of the Allspark, is divided into two campaigns: one for the Autobots, and one for the Decepticons. The Autobot campaign closely follows the overall plot of the movie, while the Decepticon campaign diverges from the film's plot starting with the end of the second chapter.

Both campaigns are pretty lengthy and feature semi-open worlds for players to explore. The story is told with a mix of cutscenes, both with and without dialogue.

In considerably Lighter and Softer to both the 2007 film and Transformers: The Game (DS). Despite receiving average reviews at release, it still has a strong following, and is seen as a pretty good adaptation for its time in comparison to most Licensed Game titles.

Transformers: The Game contains examples of: