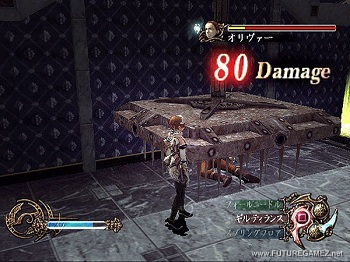 So you're minding your own business, mourning your for-some-reason-dead mother with your absurdly-dressed handmaid and your father the king when he gets murdered. You're blamed because your stepmom hates you, and you and your maid run off to a castle that your family owns which just so happens to be inhabited by the Fiend, a poorly-explained demon of some kind. The Fiend gives you the power to set traps and murder everyone that comes into your castle. Congratulations, you're playing Trapt.

Made by Tecmo for the PlayStation 2 in 2005, the oddly named Trapt is the fourth game in the Deception series, and its Japanese title is Kagero II: Dark Illusion, due to some confusion in the series about what the actual title is. The game's premise is mostly the same as the previous entries: you're in a mansion, kill everyone too dumb to stay away. Damaging enemies nets you Warl, which is used to create new traps and open new areas. Damaging enemies also gets you Ark, which does nothing but provide you with another funny word to say while the game loads.

Not to be confused with the band Trapt, known for the song "Headstrong".