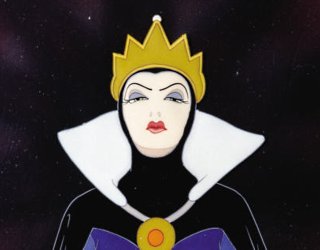 Who wears the evilest collar of them all?
"I think my favorite part of his costume is his giant, four-foot wingspan, hang-glider collar. Why can't I ever find a lab coat with one of those?"
— Doctor Insano of The Spoony Experiment, on The Dungeonmaster
Advertisement:

The high, turned-up collar is synonymous not only with Classical Movie Vampires, but with Obviously Evil villainy in general.

This began when Dracula was adapted into a stage play, and Bela Lugosi famously played the count wearing an Ominous Opera Cape with the collar upturned, so that he could just turn around into the shadows, and the collar and blackness of the long cape made him seem to disappear. When it was made into a film, the effect was redundant, but Lugosi kept the collar of the cape up just for the appearance, and it became iconic.

It's usually paired with a long, flowing cape, but it's not necessary.

Even Evil Queens and Daddy's Little Villains can wear collars like this, although they are sometimes more extravagant than when male villains wear them.

Also note that heroes are not excluded from wearing high collars, it's just not a sign of evil when they do it.

A Sister Trope to Mystical High Collar (and overlaps with mystical villains), Ominous Opera Cape (and is often paired with this trope, as was codified by Lugosi's performance).