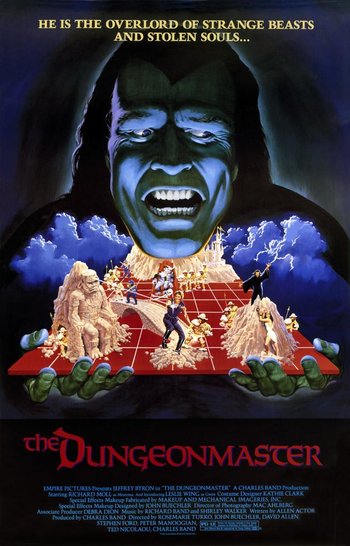 Mestema: In a future reality, I shall destroy you!
Paul Bradford: Well, I reject your reality and I substitute my own!
Advertisement:

A sci-fi/fantasy film from 1984, divided into seven distinct story segments, each written and directed by a different person (including one segment by its producer, Charles Band).

Paul Bradford (Jeffrey Bryon) is a super smart, but underpaid, tech worker who's having trouble with his girlfriend, Gwen (Leslie Wing), over the feeling he likes his work more than her.

One night an evil wizard named Mestema (Night Court's Richard Moll) pulls them into another world, to challenge Paul to save Gwen's life and his own. All Paul has to help him is his computer system, X-CaliBR8, now turned into a Super Wrist-Gadget.

This film is also known by several alternate titles, most prominently Ragewar: The Challenges of Excalibrate and Digital Knights. In spite of its most popular name, it has no connection to the game Dungeons & Dragons.