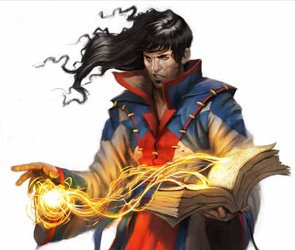 A high, flared collar is a common item worn by characters with mystical powers (whether magic, ESP, or something else).

This was long part of the look for people passing themselves off as mystics (along with turbans, head scarves, and crystal balls). Also, a high collar, that fully concealed a wearer's head from behind, was useful in certain stage-magic tricks that employ body-doubles. So this showed up in fiction for mystical characters.

A Sister Trope to High Collar of Doom (and overlaps with mystical villains), Robe and Wizard Hat.