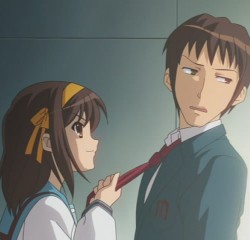 "I feel like I'm being bullied out of my lunch money."
Advertisement:

A situation where a man (and it almost always is a man) is dragged off or restrained by his necktie, which serves as a sort of "leash" for whoever's holding it. The one holding it is almost always a woman, and this trope can be seen as the visual equivalent of "pussy whipped", possibly serving as a visual cue for a Henpecked Husband or Mistress and Servant Boy. It's also a way of suggesting that some major league smooching (or beyond) is going to occur later off-screen.

Obviously, a tie serves as a handy holding strap for anyone to grab—but of course, Freudian psychologists are prompt to note that a full cravat is a phallic symbol

— hence women using them to lead their men around.

This trope is usually used to indicate who has the control in a relationship and is almost always Played for Laughs, though very rarely you'll ever see it happen with a man holding a woman like this and have it be seen as funny. Also, women don't wear neckties as much. Instead he'll lead her off using the Standard Female Grab Area. See also Angry Collar Grab.