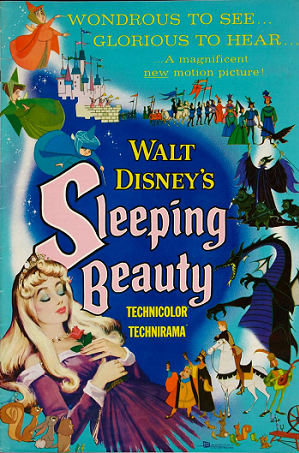 Entry #16 of the Disney Animated Canon, Disney made the Fairy Tale "Sleeping Beauty" into a movie in 1959, based loosely on Charles Perrault's fairy tale with a number of elements from Peter Tchaikovsky's ballet, including the title, Sleeping Beauty, the entire musical score, as well as the princess's name, Aurora. By a bit of contortion, they manage to come up with a reason for calling the heroine both Aurora and Briar Rose (the French and German versions of her name rendered into English).

Having already adapted two similar Fairy Tales, the biggest challenge story-wise was how to make the plot different without recycling too many elements. Walt wanted the story to be more streamlined, focusing on the central plot about the two lovers without the numerous side plots involving minor characters like dwarves or mice. Technically, the final film is rather streamlined with one major plot... because the animators had so much fun fleshing out the Three Good Fairies that the film completely unintentionally became a Perspective Flip about the efforts of three heroines to rescue the sleeping beauty and her prince from an evil fairy. If Walt's original plan had been followed, the fairies would have been Single-Minded Triplets with no distinctive personalities (quite ironic, as it was Walt Disney himself who pushed for the dwarfs in Snow White to have distinct personalities).

Don Bluth was an assistant animator for the film as his very first professional animation gig.

This film features in the Kingdom Hearts series from Square Enix — Maleficent takes the role of the leader of the Disney Villains and serves as a primary antagonist in the first game, and Aurora appears as one of the Princesses of Heart. The fairies appear as a One-Scene Wonder in Kingdom Hearts II, and the prequel Kingdom Hearts: Birth by Sleep introduces an entire world themed after the movie, with Prince Phillip serving as a party member during part of the game. The fairies also feature as important characters in the Disney Junior series Sofia the First.

In 2014, Disney brought out Maleficent, a live-action Perspective Flip version of this film.

Example of:
Lady of Black Magic