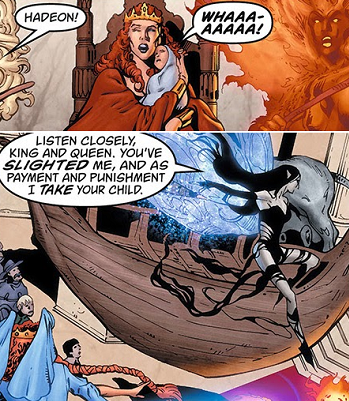 "The princess shall indeed grow in grace and beauty, beloved by all who know her. But... before the sun sets on her 16th birthday, she shall prick her finger — on the spindle of a spinning wheel — and DIE!"
— Maleficent, Sleeping Beauty
Advertisement:

The Fairy Devilmother, on the other hand, does not give blessings. In fact, if you see the Fairy Devilmother, bow down and hope that she is feeling merciful that evening. There is no running from her. You will get hurt somehow, but maybe things won't turn out as bad if you cooperate. Instead of dealing in blessings, dreams, and wishes your heart makes, this Fairy dabbles in creating doom, using dark, unholy powers to curse their wards.

Their motivations vary. Maybe they're just evil by nature, or are a cruel trickster. Maybe you gave them great disrespect in some way and so decide to "bless" you or your newborn baby with a cruel and unusual fate. Maybe they think they're helping but have unconventional ideas on what that means. While the fairies themselves won't always be in literal black, they are almost always dark, dealing in dark magic in contrast to their more sugary sisters.

Sub-Trope of The Fair Folk and Fairy Godmother.