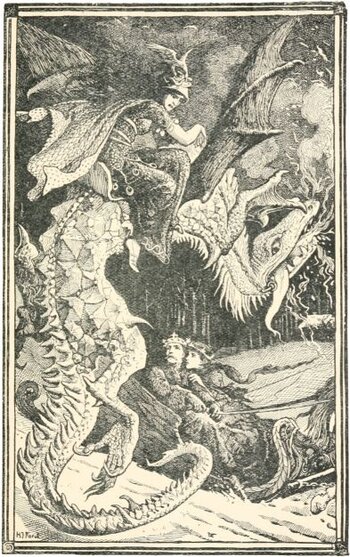 "Heart of Ice" (or Le prince Courtebotte et la princesse Zibeline) is a French Fairy Tale written by Comte de Caylus and translated and collected by Andrew Lang in the Green Fairy Book.

Once upon a time there were a foolish king and queen who had become parents. Back in those days, it was customary to invite the whole Fairykind to a royal child's baptism. Unfortunately, the king takes too long to read the summons, with the consequence that the first group of fairies to arrive at the palace become annoyed at being kept waiting. One angry fairy says the newborn prince will never be "anything but a Mannikin", but she is talked out of uttering nastier curses by the Fairy Genesta. Later, Genesta informs the King and the Queen she cannot trust them to raise their son properly, so she "will take him away and take care of him, and [they] will not see him again until he is all covered with fur."

Despite his parents' protestations, Genesta carries off the prince to her castle and places him under the care of a peasant woman. During the next years, Mannikin grows into a smart, resourceful man and a skillful warrior despite his short size thanks to Genesta, who frequently sends him on quests to build his character.

During one of his journeys, Mannikin rides into a city right when two ambassadors are announcing their king has sworn to marry his daughter Sabella to the one who can reach the summit of the Ice Mountain. When they unveil Sabella's portrayal, Mannikin promptly decides to undertake the mission. Although he is not taken seriously by the ambassadors -or anybody-, he is said to head towards Princess Sabella's realm to receive further instructions.

As travelling eastward, Mannikin runs into a strange ship whose woodwork is turning into trees, and whose roots are growing into the unconscious crew. Mannikin manages to save them, and the crew -after promising to take him to whatever coast he pleased- explain their ship was enveloped by a mysterious cloud of dust which caused all wooden stuff blossom. Mannikin collects a handful of the dust, thinking it might come in handy someday. Later, he arrives in a kingdom inhabited by sapient spaniels. Mannikin meets up with King Bayard, who explains he and all his subjects were turned into dogs because he turned a fairy's romantic advances down. Mannikin and Bayard quickly befriend each other, and in addition to offer his assistance, Bayard insists that Mannikin takes his page Mousta with him.

Several months later, Mannikin and Mousta arrive in Trelintin, the capital of Princess Sabella's kingdom, and the prince finds out King Farda-Kinbras and Queen Birbantine pissed Fairy Gorgonzola off when they arrogantly challenged fate to spoil their happiness. When Princess Sabella was born, Gorgonzola stole her heart and stashed it away in an ice temple on the summit of the Ice Mountain, located in the North Pole. So far, hundreds of knights had perished as attempting to retrieve her heart.

Mannikin appears before the king and promptly becomes object of mockery on the part of all other princes who had come to undertake the quest. Undeterred, Mannikin challenges the loudest bully to a duel, and later introduces himself to the princess. Aware that romantic speeches will not work with someone whose capability to love was taken away since her birth, Mannikin opts for being simply nice and entertaining, and he asks her to attend his duel. The next day, Mannikin beats his rival quickly and easily, and the royal family begins taking him more seriously.

Very soon after, King Farda-Kinbras receives a letter of King Brandatimor, who considers the Ice Mountain quest to be nonsense and demands Princess Sabella is married to him right away. When Farda-Kinbras turns his arrogant ambassador away, Brandatimor declares war. Mannikin gains a wider renown during the war and wins the final battle thanks to his friend Bayard's troops.

As soon as the war is over, Mannikin's rivals set off towards the Ice Mountain, and Mannikin decides to follow suit immediately. Before his departure, though, Princess Sabella gives him her cloak of marten's fur. Mannikin finally sets forth towards the Ice Mountain, accompanied by King Bayard's spaniel army. Throughout their journey, Mannikin uses the enchanted boat's magic power to turn twigs into tree groves whenever they need to camp by the night, ensuring they remain warm and well-fed. After several months, the expedition reaches the foot of the Ice Mountain. After climbing up the mountain laboriously, the group go into the Ice Palace and find a sparkling diamond containing Sabella's heart sitting on a big throne. Mannikin grabs the heart before passing out, and he is quickly dragged out of the palace by his spaniels.

Mannikin and his companions head back home and after several months they reach the capital, where they are warmly greeted by the royal family. Mannikin hands Sabella's heart over to the princess, who declares it already belongs to him anyway.

As Mannikin is telling them his history, Genesta turns up to reveal Mannikin's true lineage in reward for his courage and good heart. Likewise, the Fairy Marsontine has turned King Bayard and his subjects back into humans as a reward for their kindness to Mannikin. As Genesta is speaking, Mannikin's real parents are ushered into palace and embrace their son, noticing he is really covered with fur, as foretold.

Prince Mannikin and Princess Sabella get married, and "The Prince, out of grateful remembrance of the Princess Sabella's first gift to him, bestowed the right of bearing her name upon the most beautiful of the martens, and that is why they are called sables to this day."