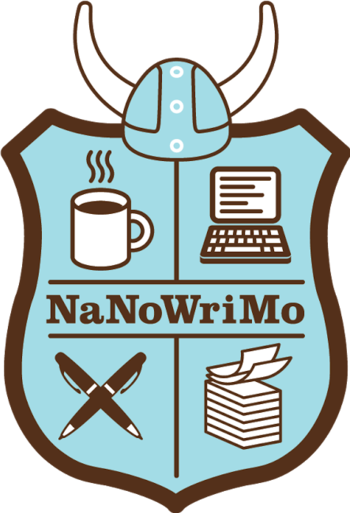 Thirty days and nights of literary abandon!
"No Plot? No Problem!"
— Their slogan
Advertisement:

The idea behind National Novel Writing Month is that many of us have at least one book inside of us, but we're too lazy to spend the time to write it, or simply get overcome by the scope of it all—so it ultimately never materializes. NaNoWriMo challenges that, by encouraging participants to throw caution to the wind and write without revising, without obsessing over what they're writing, but to just get the words out. (There'll be plenty of time to edit it after the month is up.)

, a project of The Office Of Letters And Light.

Even though it is called "National" Novel Writing Month, entries are accepted from countries other than the U.S.A and in languages other than English. note It is slightly harder to complete outside North America, due to the lack of the extra hour from daylight saving time early on, although the Yankees get burned later on by losing a whole afternoon in the fourth week to actually having to sit down to eat a meal with obnoxious relatives. It balances out, except for Canadians who get the extra hour and don't lose the fourth Thursday of the month to a holiday, having gotten their sitting down and eating a meal with obnoxious relatives over with in October.

NaNoWriMo also had a sister event called Script Frenzy, with a similar goal, but executed in script format. It ran in April every year from 2007, but was ultimately discontinued in 2012. The RPM Challenge is the musical equivalent to NaNoWriMo, in which budding musicians record and mix an album of 10 songs during the month of February.

Examples of tropes exhibited by NaNoWriMo:

Examples of tropes exhibited by NaNoToons

(a comic about NaNoWriMo that used to be hosted on the website, now hosted here