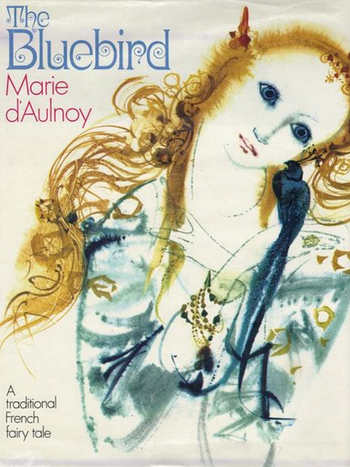 " is a French Fairy Tale by Madame d'Aulnoy, originally published in 1697. Andrew Lang included an English translation of the story in The Green Fairy Book.

Once Upon a Time, the Queen of the wealthy kingdom passes away, leaving behind her husband and young daughter, Princess Florine. The king remarries a new woman with a daughter a little older than Florine, Truitonne. As the princesses grow up together, Florine is kind and beautiful, while Truitonne is ugly and selfish. This causes the Queen to grow jealous of her step-daughter, and goes out of her way to make Florine miserable.

One day, when the girls are grown up, Prince (sometimes King) Charming of a neighboring kingdom pays a visit, and despite Truitonne and her mother’s best efforts, it’s Love at First Sight between him and Florine. Enraged, the Queen and Truitonne persuade the king to lock Florine in a tower for the remainder of Charming’s visit, insisting that Florine is ill and must rest. However, the Queen concedes to arrange a meeting between Charming and Florine one night, where Charming proposes to Florine. The dark of night keeps Charming from realizing that he has actually just proposed to Truitonne.

At the wedding, Charming realizes that he has been tricked. An argument breaks out between him and Truitonne, who insists that he must keep his word and marry her. When he refuses, Truitonne’s Fairy Godmother, Soussio, curses Charming: for the next seven years, he shall be a bluebird. In his new form, Charming flies to the forest near the tower where Florine is being held prisoner, and the lovers are reunited. For the next two years, Florine and Charming bond and keep each other company through their respective misfortunes. Often, Charming will fly in with some sort of treasure to give to Florine as gifts.

Meanwhile, the Queen is still trying to find a husband willing to marry the awful Truitonne. Exhausted by the futility of the task, the Queen opts to let off some steam by tormenting Florine in her tower, only to burst in on Florine and Charming singing together. She also discovers Charming’s gifts and realizes that her stepdaughter must be receiving some sort of aid. The Queen recruits a woman to move into Florine’s tower, ostensibly to give the princess some much-needed company, but actually to spy on Florine and report back to the Queen and Truitonne. Florine and Charming don’t see each other again for a while, fearing Florine’s step-family learning their secret. One night, when they’re certain the spy is asleep, they meet again, but unfortunately, the spy awakens and tells the Queen and Truitonne about everything.

When Charming isn’t visiting Florine, he’s made a nest for himself in a nearby cypress tree, which the Queen arranges to be covered in knives and razors. When Charming flies over, he cuts his wings and falls to the ground. Luckily, an old friend of Charming’s, a sorcerer, finds him and helps him recover. He even finds Soussio and convinces her to transform Charming back into a man, but under one condition: he will get to be himself again for a few months. During this time, he must marry Truitonne, but if he does not, he will be transformed back into a bird forever. Additionally, Florine has no way of communicating with anyone outside her tower and does not know any of this, and fears that something horrible must have happened to Charming.

Then one day, Florine’s father, the King, dies. The people of the kindgom rise up against the Queen. The rebellion results in the Queen’s death while Truitonne seeks refuge with her godmother, and Florine is finally released from her tower and becomes the new Queen. Soon after, Queen Florine appoints a council to lead that kingdom while she embarks on a quest to find out what happened to Charming.

Disguised as a peasant, Florine encounters an old woman. Impressed with Florine’s goodness and devotion, the old woman reveals herself to be a fairy. She explains that Charming has regained his true form and returned to his kingdom. Additionally, she gives Florine four magical eggs to help her on her journey. Florine cracks open the first egg when she has to scale a steep mountain made completely of ivory. Inside the egg are good grappling irons, and Florine makes it over the mountain in no time. Next she encounters a village in a valley with an enormous mirror that shows to you only what you want to see about yourself. To avoid giving into the same temptation and to avoid the wrath of the villagers she’d receive if she harms the mirror, she uses the second egg, which gives her a chariot pulled by doves that flies her to Charming’s Castle.

The castle guards do not recognize Florine and turn her away. To make matters worse, since Florine still doesn’t know the complete story, as far as she can tell, Charming has betrayed her to marry Truitonne soon. Pretending to be a peddler, Florine bribes her stepsister with the same jewels and gifts that Charming had given Florine when he was in bird form, and in return, Florine may sleep at the castle, specifically in the “echo room”, a chamber situated underneath Charming’s bedroom in which he can overhear every word a person says there. Every night, Florine cries as loudly as she can, asking for some explanation from her former lover. What Florine still doesn’t know is that Charming has been suffering from insomnia worrying about ‘‘her’’ and has begun taking sleeping potions to counteract that.

Florine opens the third egg, revealing a tiny carriage pulled by mice. She trades the carriage in exchange for a second night in the echo room, but again, Charming cannot hear her. However, this time, one of the castle’s servants does hear her cries. She turns to the fourth and final egg, which contains a pie made of singing birds. Florine agrees to give it to him if he sees to it that Charming can hear her the next night. The servant keeps his promise and Charming does not take the sleeping potion, causing him to hear every word. Florine and Charming finally reunite, and after explaining to each other everything that has happened, affirm their love.

This still leaves them with the problem of Soussio. Fortunately Charming’s sorcerer friend and Florine’s fairy sponsor arrive shortly after their reunion, and announce that they have joined powers to keep Soussio from doing any harm to the couple. Truitonne tries to protest, but the fairy and sorcerer transform her into a pig. Free at last from their enemies, King Charming and Queen Florine marry and live happily ever after.