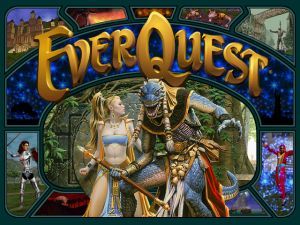 Set in the fantasy land of Norrath, you start as a racenote Human, Barbarian, Dark Elf, Drakkin, Dwarf, Erudite, Half Elf, Halfling, High Elf, Gnome, Iksar, Ogre, Troll, Vah Shir, Wood Elf and pick a character class note Berserker, Cleric, Druid, Enchanter, Mage, Necromancer, Paladin, Ranger, Shadowknight, Shaman, Warrior, Wizard (which classes are available are restricted by race). Technically you have a hometown, but you start in a tutorial dungeon and then head straight to Crescent City (assuming you didn't just make Crescent City your hometown, which the game strongly encourages you to do). After perhaps hundreds of hours of Level Grinding and quests, you can reach a level where the wildlife, highly aggressive to your innocent adventurer, won't kill you in seconds. This can be sped up much by having a team member or five.

The game has, naturally, undergone massive changes since its 1999 release. To the point where it's hardly still the same game. Luckily, there exists a popular mod called Project 1999

EverQuest has a sequel, EverQuest II. 2004 saw the release of a (mostly forgotten) RTS adaption, known as "Lords of Everquest". There's also a tabletop version of EverQuest and a couple of tie-in novels. Champions of Norrath is an action-RPG spinoff.