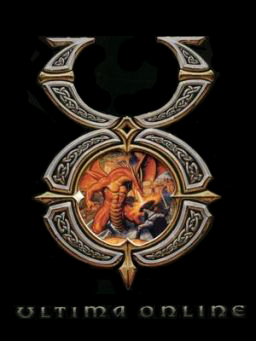 The first widespread commercial success in MMORPGs, first released in 1997 by Origin Systems. Developed based on Richard Garriott's Ultima series of games. Initially intended for each server to host roughly 300 players the game garnered unexpectedly huge numbers. Notable for its classless and level free skill based system whereby you could create a character with any combination of skills and gained power by using them. Instead of slaughtering monsters to raise your magic skill you used magic. Using a sword would raise your swordsmanship. Also notable was the game's emphasis on Sandbox gameplay. Little overarching storyline existed. Player freedom and enforcement of good behavior was expected. Unfortunately the developers didn't realize what they were in for. Approximately 1% of their total playerbase rampaged through the game world slaughtering other players by the thousands. They got around this by creating a mirror world called Trammel where PVP was heavily restricted.
Advertisement:

Despite a rocky start the game flourished and is still running today. Several expansion packs have added content over the years to say nothing of drastic changes added by free patches.