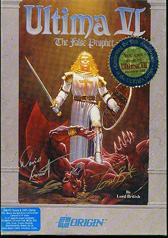 "Think again, Avatar: For whom dost thou seek the Codex?"
— Altar of Singularity
Advertisement:

Ultima VI: The False Prophet is a PC game released in 1990 by Origin Systems. It was the last title of the "Age of Enlightenment" Trilogy of the Ultima games. The Avatar is once again summoned to Britannia, but not by Lord British — this time it's by a race of demonic-looking beings called Gargoyles who immediately try to sacrifice him. He is rescued by his core party from the previous two games and discovers that the Gargoyles have invaded Britannia and have taken control of each Shrine, the focal points of the Way of the Avatar.

Why have the Gargoyles attacked? Where did they come from? How can their threat be stopped? And who is the False Prophet?

This game was first made for the IBM-PC, then ported to the Atari ST, C64, Amiga, and SNES. It was also ported to the FM Towns in Japan. A fan-made engine called Nuvie

is available that makes the game playable on many modern PCs. It is currently available at Good Old Games

, bundled with Ultima IV and Ultima V. There is also a full-blown 3D Fan Remake available,

though you'll need a working copy of Dungeon Siege to run it, as it uses the DS engine.

The game was a significant departure from previous Ultima games. It abandoned its predecessors' Overworld Not to Scale in favour of a fully-scaled Wide-Open Sandbox world design, and it introduced a Point-and-Click Game interface. Both of these changes were adopted from Times Of Lore, an Action RPG influenced by The Legend of Zelda.