You All Look Familiar 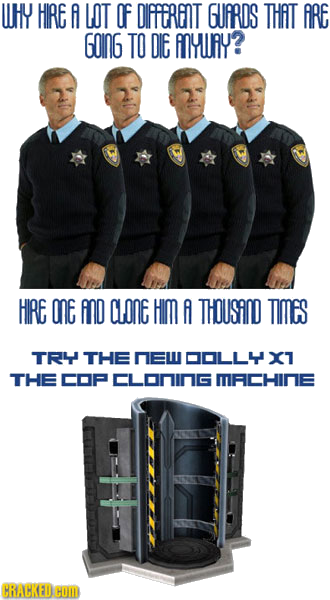 Hey, you only have to pay for one set of insurance.
"This is another one of those problems that are exacerbated by new-gen graphics. Now that we can do photo-realistic faces, it's suddenly very weird that we're killing hundreds of identical clones."
— Cracked, "The 7 Commandments All Video Games Should Obey"

It requires time, work, money, and storage space to create a decent-looking video game sprite, and even more of the same to create a 3D model. Giving each individual character in the game a distinct look borders on madness. As a result, most video game worlds have only about seven or eight distinct body types for unimportant NPCs. This means that wherever you go, you'll see the same people over and over again... only it's not them! It's almost creepy... it starts to make you wonder if there isn't some massive cloning conspiracy going on... or maybe they're all just cousins!

Basically, the Video Game version of Faceless Masses, though not quite as extreme.

While this is present in a lot of games, it's most notable in RPGs, where there are NPCs by the bucketful that exist mostly to make the towns feel more lively. A corollary is that if you ever see someone who isn't using a stock body, you can bet that he or she will be important to the plot, even if in a minor way.

Most series with Serkis Folk use the same models for all non-human creatures.

For the naming equivalent, see Nominal Importance. See also: You Look Familiar, which deals with multiple roles being played by the same actor in the same continuity.

When the characters are actually supposed to be inexplicably identical, that is Inexplicably Identical Individuals. When Mooks share the same face, thereby positing a unique face as a symbol of identity, can be a subtrope of Faceless Goons. If it's a race of aliens that all look the same (at least to humans), then those are Ditto Aliens. If the developers are trying to disguise it, they may use Palette Swap. When the characters are relatives or have an ancestor who looks identical, then it's Identical Grandson.

The polar opposite is Cast of Snowflakes, when every character has a unique design. Though it's entirely possible to use both at once, if completely background characters reuse character designs.

Vinny mingles with the crowds in New York City Bus Simulator, only to find that their motionlessness isn't the only strange thing about them.

Alternative Title(s): You All Look Alike

Vinny mingles with the crowds in New York City Bus Simulator, only to find that their motionlessness isn't the only strange thing about them.