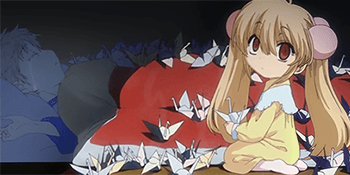 Rin believed that if she folded 1,000 paper cranes, Aki-san's sickness would go away...
"Hey, they say, if you fold a thousand of these cranes, your wish'll come true."
— Nunnally, Code Geass
Advertisement:

There's an ancient Japanese legend that states if someone folds a senbazuru — an arrangement of a thousand origami cranes tied together — a crane will come to them and grant them a single wish, such as long life or recovery from serious illness or injury. They are also a popular wedding gift (symbolizing a wish for a long and happy marriage), due to the immense time involved.

In modern times it has grown to be been used as a symbol for world peace, spawning from the story of Sadako Sasaki, a girl who died of leukemia from the Hiroshima bombing in World War II. More information from The Other Wiki

There is something similar called Senninbari. Senninbari was a strip of white cloth, approximately one meter in length, decorated with 1000 stitches in red thread from 1000 women, used as an amulet given to soldiers on their way to war as a part of the Shinto culture of Imperial Japan. The belts were believed to confer courage, good luck and immunity from injury (especially bullets) upon their wearers. See this

entry in The Other Wiki for more, though really the fact that today the Kaiju Defense Force uses kevlar ballistic armor like everybody else (not to mention the fact that it's a defense force and not an actual army anymore) should tell you just about everything you really need to know.

This is not to be confused with the Yasunari Kawabata novel "Thousand Cranes", the title of which refers to a certain handkerchief pattern.

Olly plans to use 1000 origami cranes to make a wish to commit genocide on all the Toads.

Olly plans to use 1000 origami cranes to make a wish to commit genocide on all the Toads.