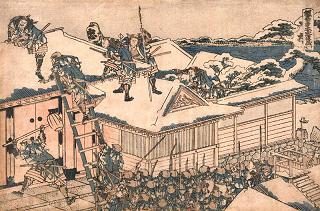 "What if Lord Kira had died of a cold?"
—Tsunetomo Yamamoto pointing out the major flaw of the lengthy plan outlined below.
Advertisement:

The Tale of The 47 Ronin is a (somewhat) true story of revenge and loyalty. The actual facts are much disputed, and large sections of the traditional narrative have been shown to be pure invention, but the story as generally told goes like this:

On April 21, 1701, Daimyo Asano Naganori and Daimyo Kamei no Tsuwano received an envoy from the Shogun in Edo. Having no experience in courtly etiquette, they hired Kira Kodzukenosuke Yoshinaka to teach them. Unfortunately, Kira was quite a jerk, and Asano, a devout Confucian, could barely tolerate him. Eventually, Asano had enough and attacked Kira. He managed to scar him, but he had committed a capital crime by drawing a weapon in Edo Castle.

Asano committed seppuku, and his holdings were taken from him. His now Rōnin retainers were ordered to abandon the idea of revenge. Forty-seven of them secretly refused, and they hatched a plan, a cunning plan, a plan bordering on ridiculous in the amount of time it would take.

, told the others to hide amongst the populace as tradesmen and merchants, while Yoshio moved to Kyoto and decided to act like a broken man, getting drunk and hanging out with prostitutes, specially in the surroundings of the famous tea house Ichiriki chaya

. A Satsuma man (described as a samurai himself and attributed in popular culture the name "Murakami Kiken") upon seeing Yoshio drunk in a gutter, insulted his honour for not avenging his master like a true samurai, spat on him and kicked him in the face. note A commoner even touching a samurai — ronin or not — would have been executed.

After a year in hiding, during which time Kira has stopped fearing assassination and dismissed most of his bodyguards, Yoshio secretly gathered his men and infiltrated Kira's home on December 14th, 1702. They attacked from front and back, sparing the noncombatants, and captured Kira. Yoshio offered him the chance to die by his own hand, with the knife that Asano had wounded him with, but he clammed up, so they held him down and used the knife to decapitate him. They took Kira's head to Sengaku-ji and laid it and the knife on their master's grave, saying prayers at the temple and giving all their money to the abbot. They then proceeded to Edo and turned themselves in.

The Shogunate had a quandary: the ronin had violated a direct order from the Shogun by avenging their master, yet some said they had acted according to Bushido by avenging their master. This has, inevitably, been debated: others believe the truly honorable thing would have been to just charge Kira's home ASAP, deciding to get gallantly cut to pieces through honest action rather than attain vengeance through trickery, especially given the major flaw in their plan — the potential for Kira to die of natural causes at some point before their attack — which would have left them unable to avenge their master. On the other hand, in a society where honour is most definitely more important than life itself, it could be argued that their actions were the ultimate demonstration of loyalty to their lord. By publicly dishonouring themselves to ensure their plan's success, they could be seen to be making the supreme sacrifice for Asano's sake. Therefore, the whole situation was a massive Logic Bomb for Japanese society of those days.

One thing, however, was perfectly clear to the Shogunate: Questions of honor aside, letting Asano's retainers off the hook for killing a court official would set a dangerous precedent. After receiving numerous petitions from the public, the Shogun decided to sentence them to death by seppuku instead of execution as criminals. Forty-six ronin died by their own hands on February 4, 1703; Yoshio had sent the last one, Terasaka Kichiemon, back to Ako to inform Asano's former retainers that their revenge had been completed. The Shogun pardoned him and Terasaka died at the age of 78, buried next to his comrades and his lord. Their weapons, armor, and clothing are still kept at Senkagu-ji. The Satsuma man who had insulted Yoshio came to Sengaku-ji to pray for forgiveness and then took his own life; he is also buried next to the ronin.

The Shogunate allowed Asano Nagahiro to reestablish the Asano clan, but only gave him a tenth of his family's former land.

It is probably appropriate to point out that despite the long-pedigreed valorization of the actions of the 47, there are still actually people who take a very dim view of them — among them obviously the surviving descendants of Kira Yoshinaka, who pointed out that he was merely a dutiful courtier whose life and legacy was stained by this controversy. Japan-based British historian Stephen Turnbull takes this view (even suggesting that, at best, their fight was more like a gang war-style execution) in a military history report published by Osprey

In Fiction
Countless books, plays, TV shows, and movies have been made about the 47 Ronin.