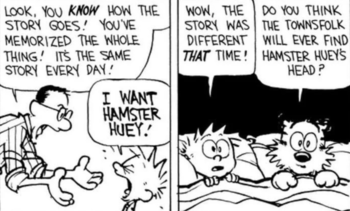 A child has demanded a bedtime story. The storyteller starts into a traditional fairy tales, but the kid (or perhaps the storyteller) insists on altering the story. As plot points are introduced willy-nilly, the narrative will eventually fall apart.

Not to be confused with Fractured Fairy Tale, though the results may be very similar. May involve Narrative Backpedaling. An in-universe form of Adaptation Decay.